“IMPATIENCE” installation and video by Zissis Kotionis
In the recent several years Zissis Kotionis is working on the field between architecture and art. In the background of his research the question is how to describe the era of the anthropocene as a geological event of the everyday experience. Fear, guilt and a sense of duty causing political response are aspects of the motivation that the dramatic geological events of the anthropocene produce. A new teleological horizon has emerged for the contemporary subject either in the terms of self victimization or in terms of socio-ecological emancipation from the destructive mega-effect of capitalism.
After having worked on the genealogies of technique and the constructive models of cosmological representation, in the project “Anaximandros in Fukushima” (2014), Kotionis proceeds in questioning the cultural experience of geology in the project “Lithology” (since 2017). Aspects of the project “Lithology” are presented in relation to the “Collectanea” project. It is worth mentioning here the architect Dimitris Pikionis as an inspired ancestor of an ecological approach to both culture and nature in his famous nature/culture landscape project on the slopes of the Acropolis.
The project under the title “The Man Who Wanted to Look Into the Stone” (2018) is a metaphysical parody. It consists of several pseudo-scientific acts to grasp the “essence” of the stone and organize rational acts of anatomy or taxonomy, to manipulate the composite phenomenological aspects of the stone. The video presents these performative acts in a sequence, as if they all consisted a handbook or a manual for anyone who “wants to look into the stone”.
The installation under the title “Impatience” comes as a continuation of the previous narration. A wooden eating-apparatus-for -two, two meters by two meters and a hight of 25 cm., represents a set of a meal where the dish is a smashed stone. Corporeality, consumption, ecological and hygienic neurosis are critically offended, since “Impatience” can be considered as a three dimensional visual essay.
Though impatience is a feeling that pre economize a desired event to come it can also function the opposite way. Impatience for bad news, impatience for a dystopic end to come. That is part of our recent culture and the way that the environmental dystopia is communicated in media and the public sphere. The anthropocene is a teleological horizon where human guilt for the end of our world is the governing affect. An irony for this unhappy happiness is presented in the installation “Impatience”. A symmetric table for two hosts a meal where a broken stone has to be shared among the hosts. The one of them as a possible chef of the meal hides the hammer that broke the stone. The other metabolizes the stone and produces new stones as an outcome of this metabolism. Yet the broken stone, as a metaphor of a planet remains there in the middle of the meal, broken and impossible to be metabolized. 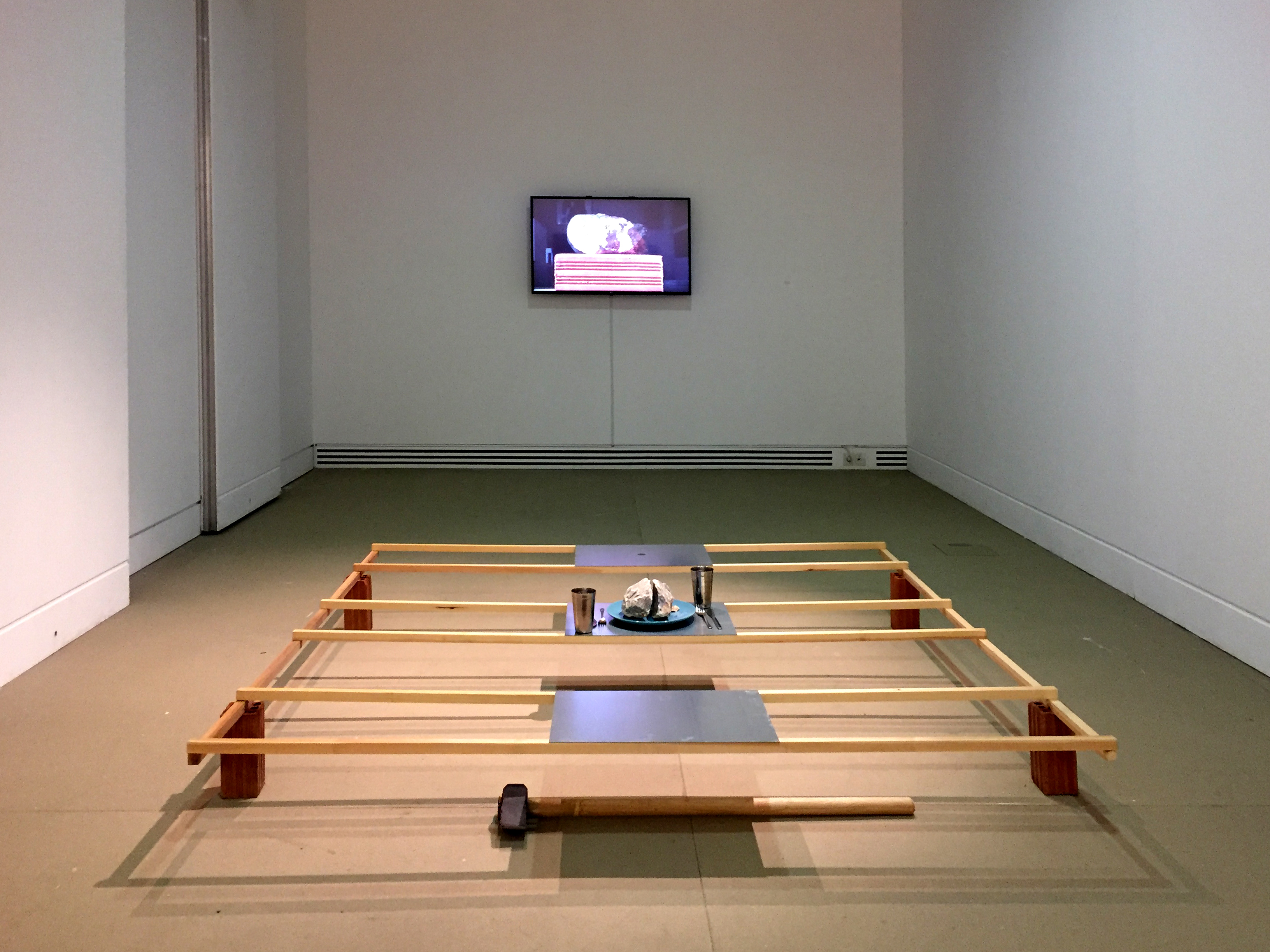 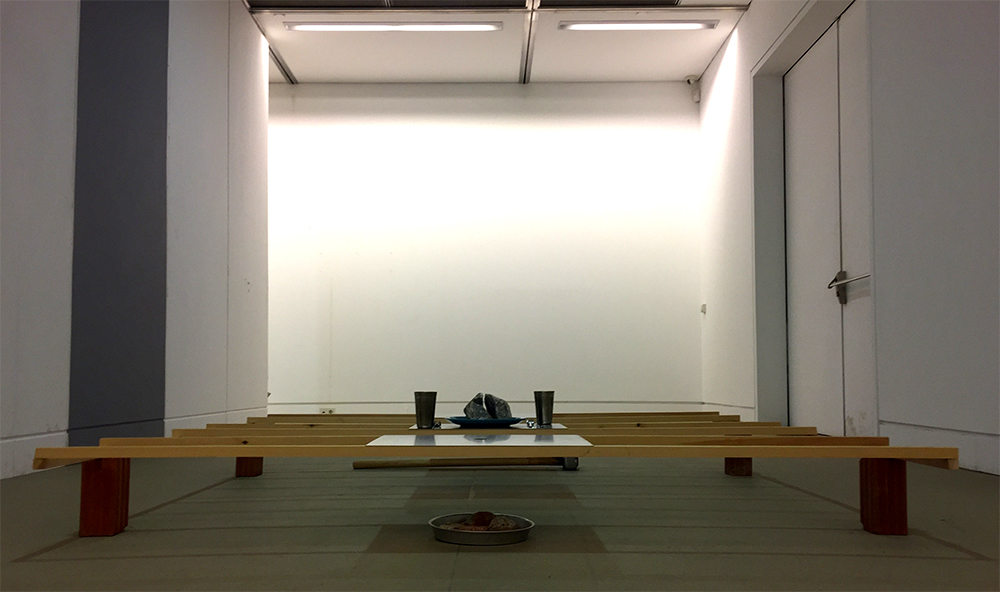 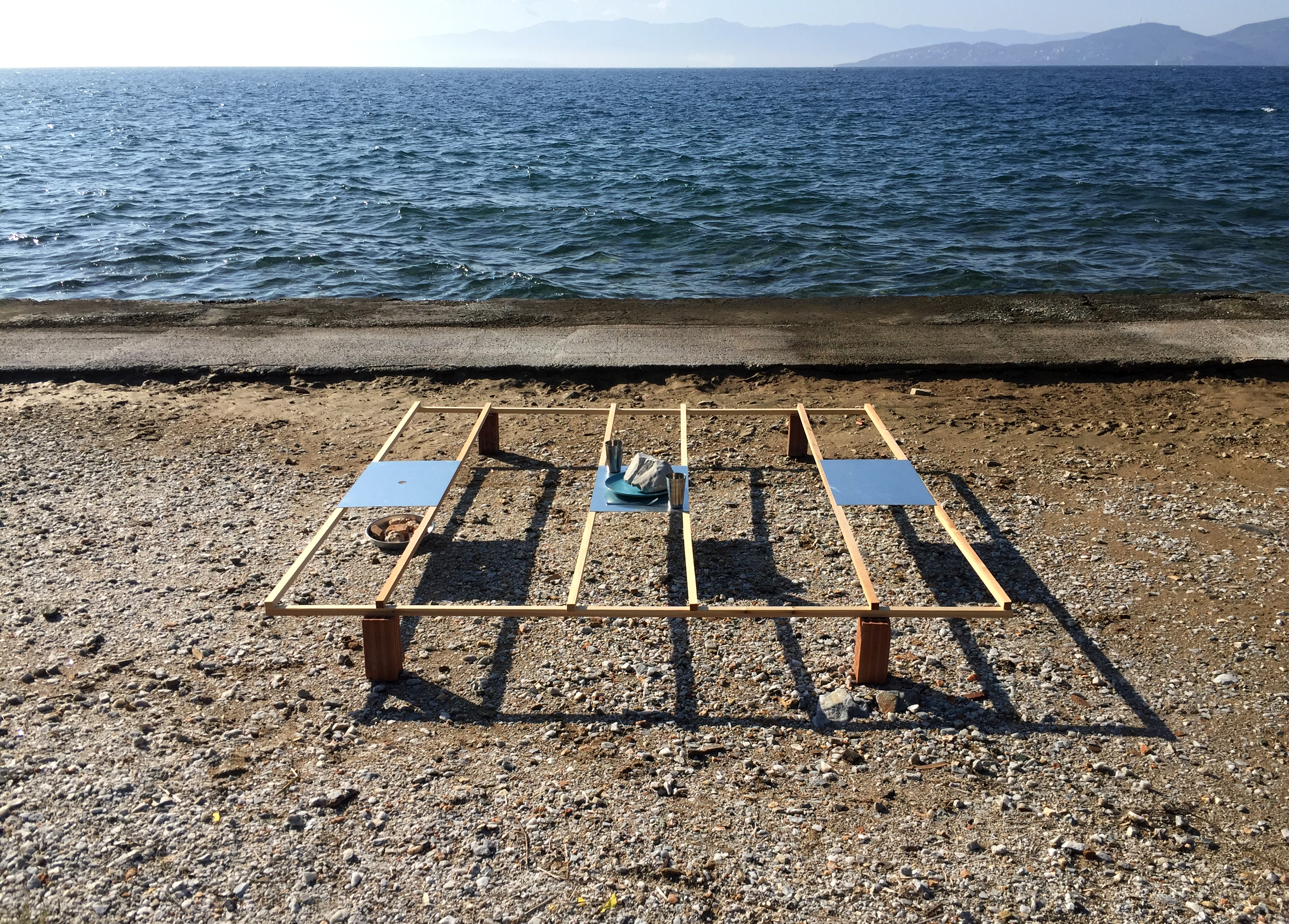